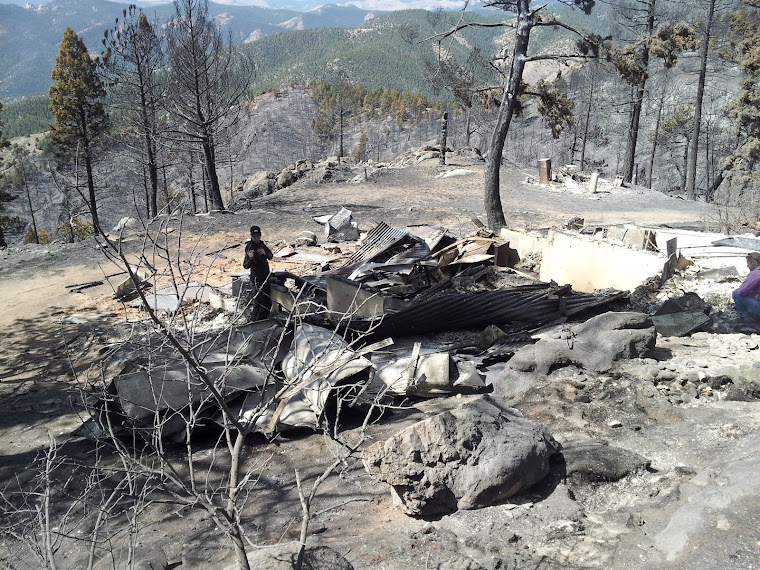 I have this little app on my phone called WeatherBug. For pretty much the entire month of March it was sending me "Fire Weather" warnings. And I'm thinking to myself, "wow, this app has an incredible grasp of the obvious." Never underestimate the power of power to nullify an innate grasp of the obvious.

The week prior to the wild fire, the Colorado Forest Service (CFS) decided they needed do a "prescribed" burn or a "controlled" burn. Using the crew of supposedly "well trained" convicts from Jeffco jail, they proceeded to set the area above the North Fork alight. I watched from the deck in wonder. Why would they be doing this now, in the driest March I have experienced in Colorado since arriving here in 1996. But, they are the "authorities." They MUST know what they are doing. Apparently, I was mistaken. They stopped burning somewhere around Thursday but the burn continued to smoulder all weekend laying down a thin layer of smoke over the North Fork. Then the winds came.

I was in Seattle on business when I received a somewhat hysterical call from my wife Kristen. She could see the fire lighting up again (Taken from our deck starting at around 2:00 pm). 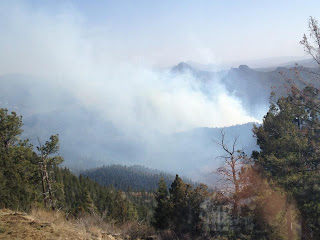 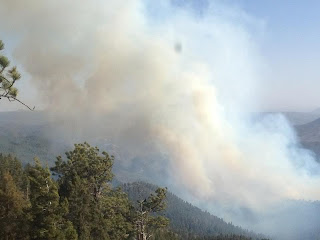 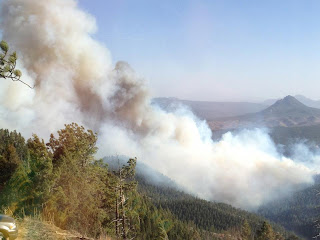 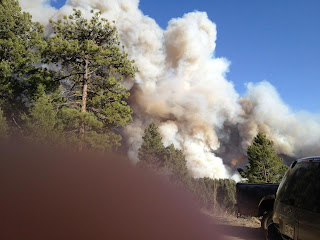 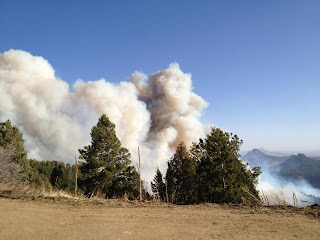 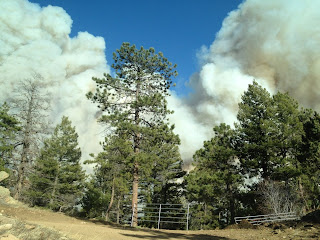 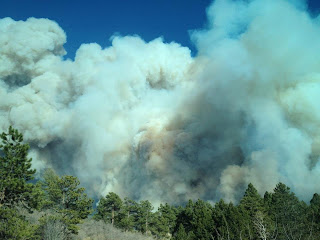 She called Inter Canyon fire department. The fire was not burning in their district so they had not been called in and did not have current information. We later found out that fire fighters living in our neighborhood had not been called to report for duty.

Fortunately for Kristen, she was able to see the fire and did not wait for a reverse 911 to tell her to get out, because that never came. I got a text on my cell at 4:10 pm in Seattle (5:10 pm Denver) telling me of mandatory evacuation. At this point, houses were already burning. Apparently a few people in Texas, Colorado Springs and Evergreen were also notified of the fire, which is useful.... not. Very few of the residents in our area actually got a 911 call, which is likely why 3 people are dead. Kristen probably got out about 30 minutes in front of the flames.

We later had a phone call with the Fire Chief that still seems surreal to me. He said that our home, our dream home that we had lived in for 9 years, was either a total loss or damaged beyond repair. I had a reaction that I can never recall having. The adrenaline was pumping so hard I thought my head would explode. I felt like I was under water. I could hear something going on around me, but I could not reconcile the fact that life continued to move as I felt frozen in time. Someone broke the spell and asked me what was wrong. I said very matter-of-factly that our home was gone. I was homeless.

I tried to get a flight out that night but was not able to find one. So, I stayed in Seattle. That was one of the longest nights I have ever spent, and not much of it was spent sleeping. I woke up with an adrenaline hangover that resulted in the worst headache I have ever had. Every move I made left me feeling like I would throw up. At 4:00, I was on my way to the airport. I arrived in Denver to a beautiful sunny day that seemed to mock me and the out of body experience I was having.

The CFS walked away from a fire they set and did not put out with high wind warnings announced for the weekend. Brilliant! But here is the part that really lights me on fire (get used to the puns, they will keep coming). Our CFS officials have managed to vote themselves into a position of immunity. They are immune to any criminal prosecution and there is a cap of $600,000 on any one event and $150,000 per person... if you can manage to navigate the convoluted legal process to actually get at the funds. This is our government at it's best. Make no mistake, this is ALL government, not just some outlying example. This is what I call "Government, by the government, for the government." They will do whatever they deem necessary without regard for the people they supposedly represent. If they have to create laws to protect themselves from their actions, maybe they should not be in the business of taking those actions. But instead, we are left to pay for CFS incompetence and irresponsibility with our property and our lives with absolutely no recourse.

Oh, but they did come out an apologize. That should fix it...

Posted by David Cottrell at 9:31 PM